WrapperConfig takes care of most configuration in the netcurl module. It also handles exceptions that should be thrown back to developers/clients/users.

Settings that will be read by the curldriver (and the other drivers) is stored in WrapperConfig-options. They are reachable with the following method calls:

WrapperConfig is built on a magics base. By means, WrapperConfig can preconfigure data that is not normally supported by the wrapper. Eeven if it is currently mostly untested, you can simply use either setOption to prepare data that should be passed through to curl, or your own set-call. For example using code that looks like this:

However, while this library is being built, proxy- and ip configuration will be a part of WrapperConfig. The magics idea will however keep the codebase and "IDE helpers" quite clean. An already implemented example is the timeout. See below in the supported magics section.

WrapperConfig is handling data storing of every http-request being made with netcurl. Each module built should use this configuration wrapper to set up and prepare for the request. In MODULE_CURL (6.0) a setAuthentication-method was stored internally and then shared to each module that was linked to MODULE_CURL. For example, setAuthentication in that module was inherited to the Soap module. For 6.1, authentication data should be fetched separately from each module. The curl module has its own authentication method, but it uses WrapperConfig to store it. In this way, other modules can reach the same data. Other data that is also stored in this wrapper can be seen below.

Throwables in WrapperConfig is based on web traffic and returned headers. In the default state, everything that returns HTTP 400 - 599 are considered throwables and will throw an exception if returned from a http request. There is a slight differense here though, since netcurl 6.1 uses an improved errorhandler. For example, the curlwrapper no longer needs to be instatiated in the same way as 6.0 required to extract exceptions from the responses. For 6.0, you had to do something like this:

Instead the errorhandler makes this possible (taken from the unittest getThrowablesByBody):

When exceptions are passing through the ExceptionHandler, exceptions are described more detailed compared to v6.0. The error message now not only contains the error string, it also contains - if it is returned from the server - the header error message too. The error example below is based on the getThrowablesByBody above. And yes, even if it returns an error in the header the extendedException is a copy of the CurlWrapper in this case, so it can extract furthermore data from the body.

Since the message body has a json-object that contains another message, we can also extract that directly from the exception via the getParsed() method:

The example is based on a document request, where document is missing, rather than the URL itself. 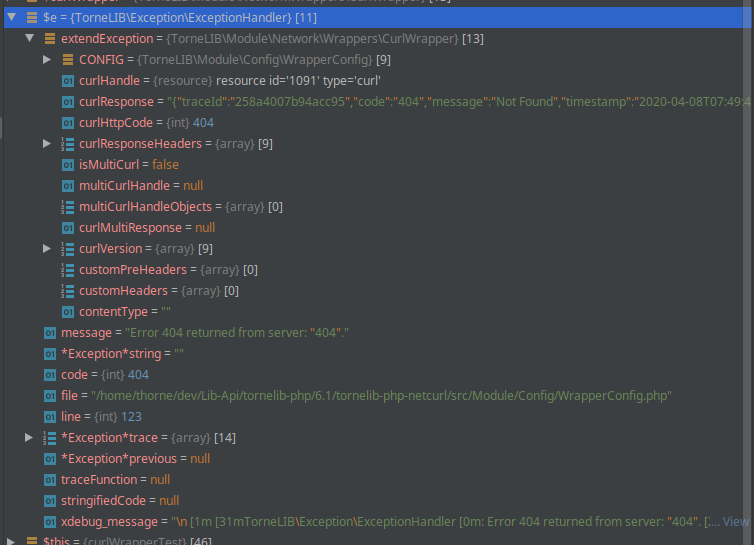